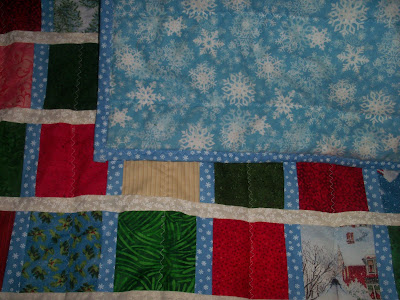 He's home and recuperating from his shoulder surgery, and as he must spend much of his day on the couch, he needed a cheerful quilt to keep him warm and cozy. The Christmas Patchwork quilt was ready and waiting for a back and binding; some vertical serpentine stitching and a binding of snowflake strips completed it, and it is very soft and comfy. Finished quilt size is 45"x 60", with eleven rows of eight 4.5" squares and 1" sashing and binding. The bolt of 44" flannel was perfect for the back. 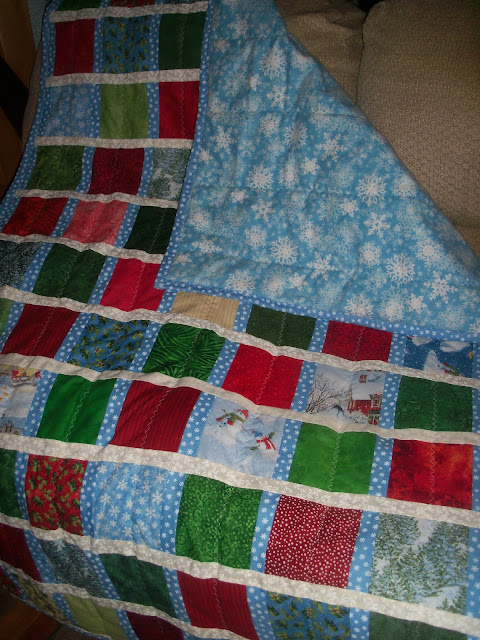 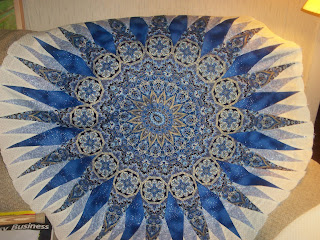 I've been working on the quilt for our new daughter in law, Heather, and our son Rob. This summer, I asked my quilt artist friend, Ann Lainhart, to make a Mariners' Compass for the center medallion of the quilt. Ann made the largest compass she's done so far, a full 36" square, with 64 beautiful fussy cut points, using her own (now published as a book) style with drafting, templates, and no paper piecing. It is a stunning piece of art! 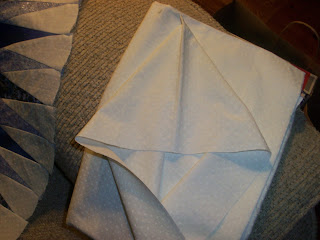 My first chore was to track down a bolt of the creamy white background fabric that Ann used to border the compass ... after a few months I did succeed in finding it at Lakehouse Fabrics in New York, and ordered a few bolts from them.

I spent a day earlier this week with Rick's help, pinning the compass onto the background fabric, and then yesterday carefully glued and pinned around the edge, eventually replacing the pins with machine applique topstitching. 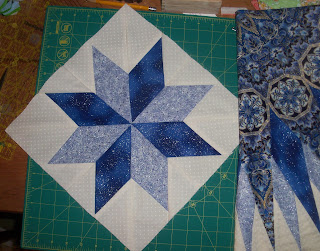 Today, I decided on four 12" corner blocks of Lemoyne stars, using Deb Tucker's Rapid Fire Lemoyne Star ruler. Ann had given me pieces of left over blues from the compass, and I found there was enough there for the four large star blocks. I finished one this morning before heading to Rob and Heather's for Thanksgiving supper; I finished the second star tonight.  Two more to go!

I'll add more fabric to widen the quilt top to a King Size, and machine applique the Lemoyne stars to the corners. Then, I'll work on the back.  More decisions ahead! 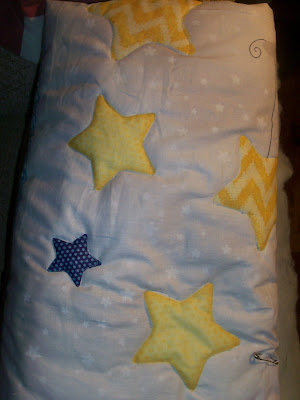 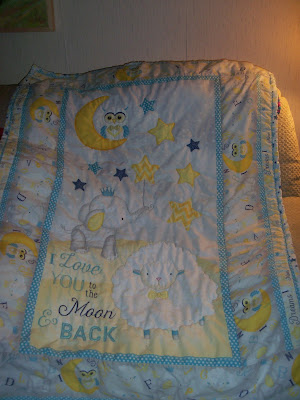 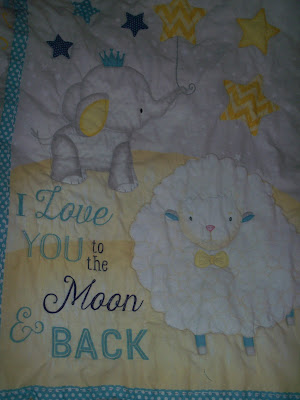 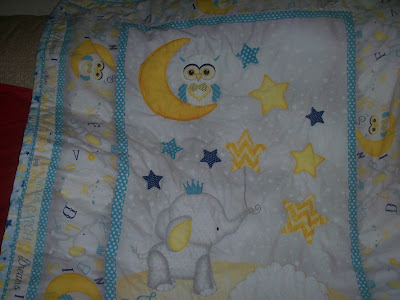 This is the first quilt that I tried free motion quilting on using a 1951 Featherweight, with a 'hopping' foot and tiny little feed dog cover replica. I backed the fabric with a Tasha Tudor print based on A Child's Garden of Verses, and bound it with a blender fabric of stars. This quilt is made for our nephew Chris and his wife Jen, as they expect their first child this winter. 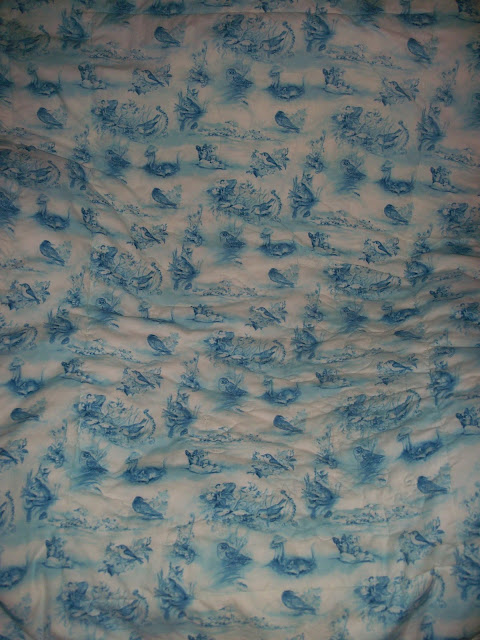 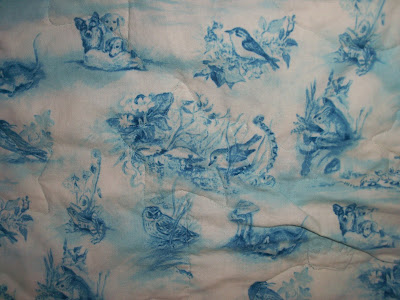 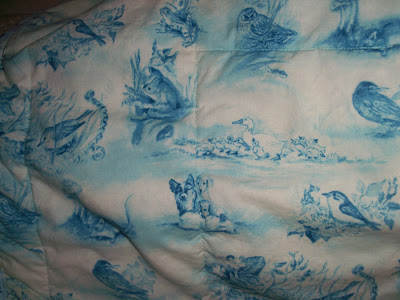 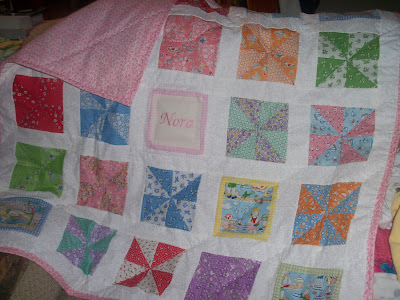 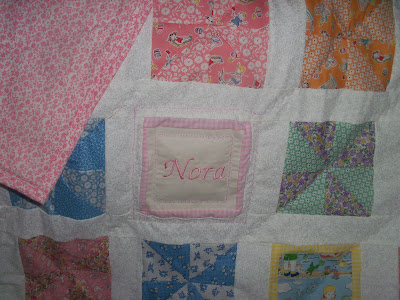 2/26/016
And we have a new great-grand-niece expected in a few months ... guess what her dear name is? Just batting, backing, quilting and binding to go! 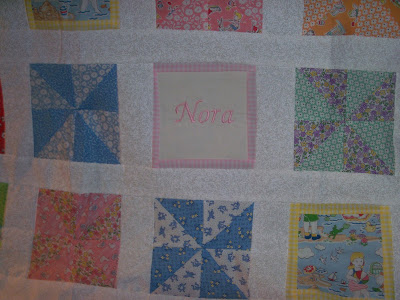 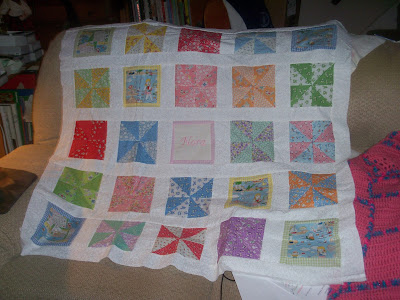 2/15/2016
Temperatures have been below zero at night, and barely above at high noon. A good week to stay inside for more quilting. I've begun a baby shower quilt for our next great grand niece, and worked on the Round Robin Christmas-themed quilt, and made three sweet little thread catchers using the pattern Dana showed me last summer. I'm working in my newly-re-arranged parlor turned sewing room, sometimes moving between two machines to complete separate tasks, and enjoying each one. Here's a peek at what I've been up to:

1/19/2015
It's been a cold day in January, with temps in the twenties and wind chills ten degrees lower than that. I spent most of the day finishing the flying geese border for the Moda Sampler Block Shuffle quilt.  Now I'll be ready to attach the geese to the sides, adding a backing and batting, and quilt it! Thirty  6" blocks sashed with black borders and bright cornerstones, surrounded by 104 flying geese. Most of the fabric is from Moda's marble swirl line.

1/17/2016
I've started this year with three projets in process ... one is a Round Robin quilt of the Merrimack Valley Quilters' Guild, one is my niece's ballerina quilt, and the third is the Moda Sampler Block Shuffle quilt. All were begun in 2015 and will be finished this year, because in addition to these three, I have three more on order!

I copied Round Robin's Quilt #1 here so they would all be on the same page:

Here's Round Robin Quilt 1's row: the owner's original row on top, and my addition on bottom. Her only request was that her quilt is to be made totally of Batik fabrics ... I had never sewn with Batiks before, and found I love the strength of the fabric and the fact that the reverse and the front are identical!  I also learned a great deal about 'scant' quarter inch seams and their role in getting points to meet in the center of a block! And as her notes suggested that she likes star blocks ... Not too bad ... 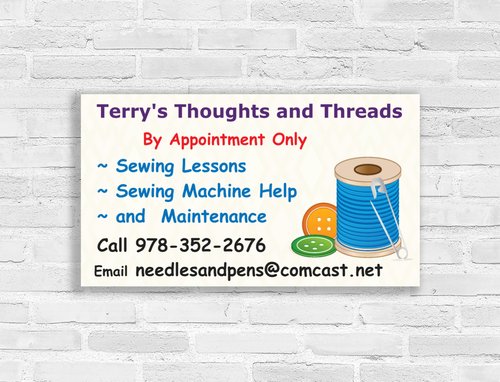 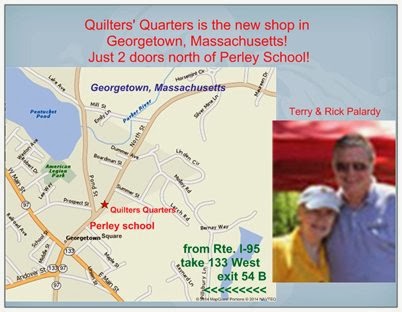 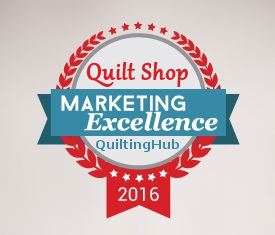 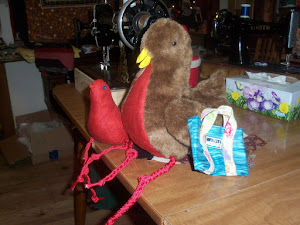 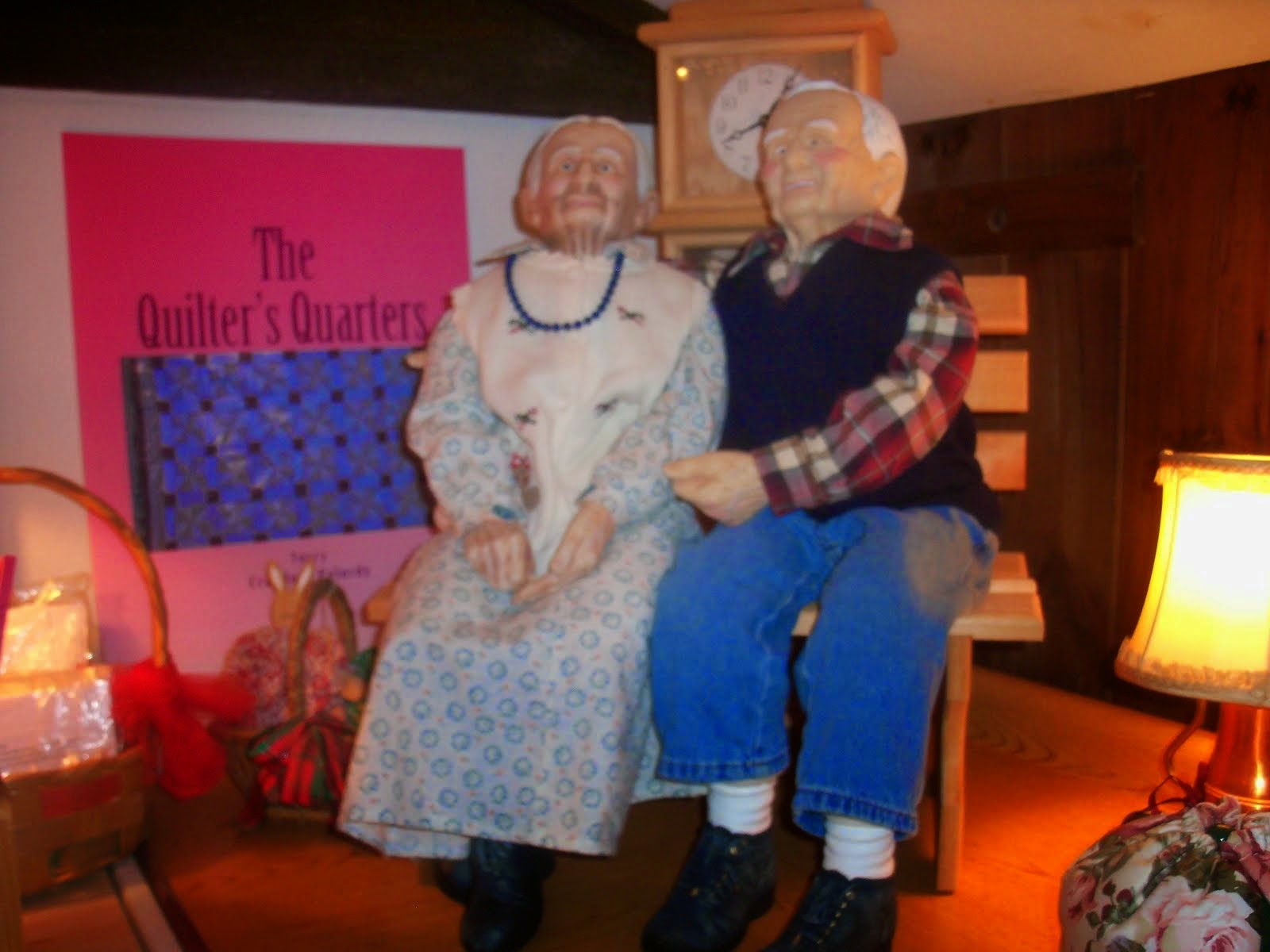 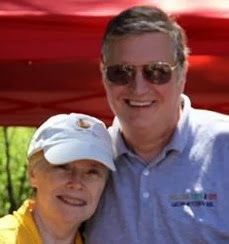 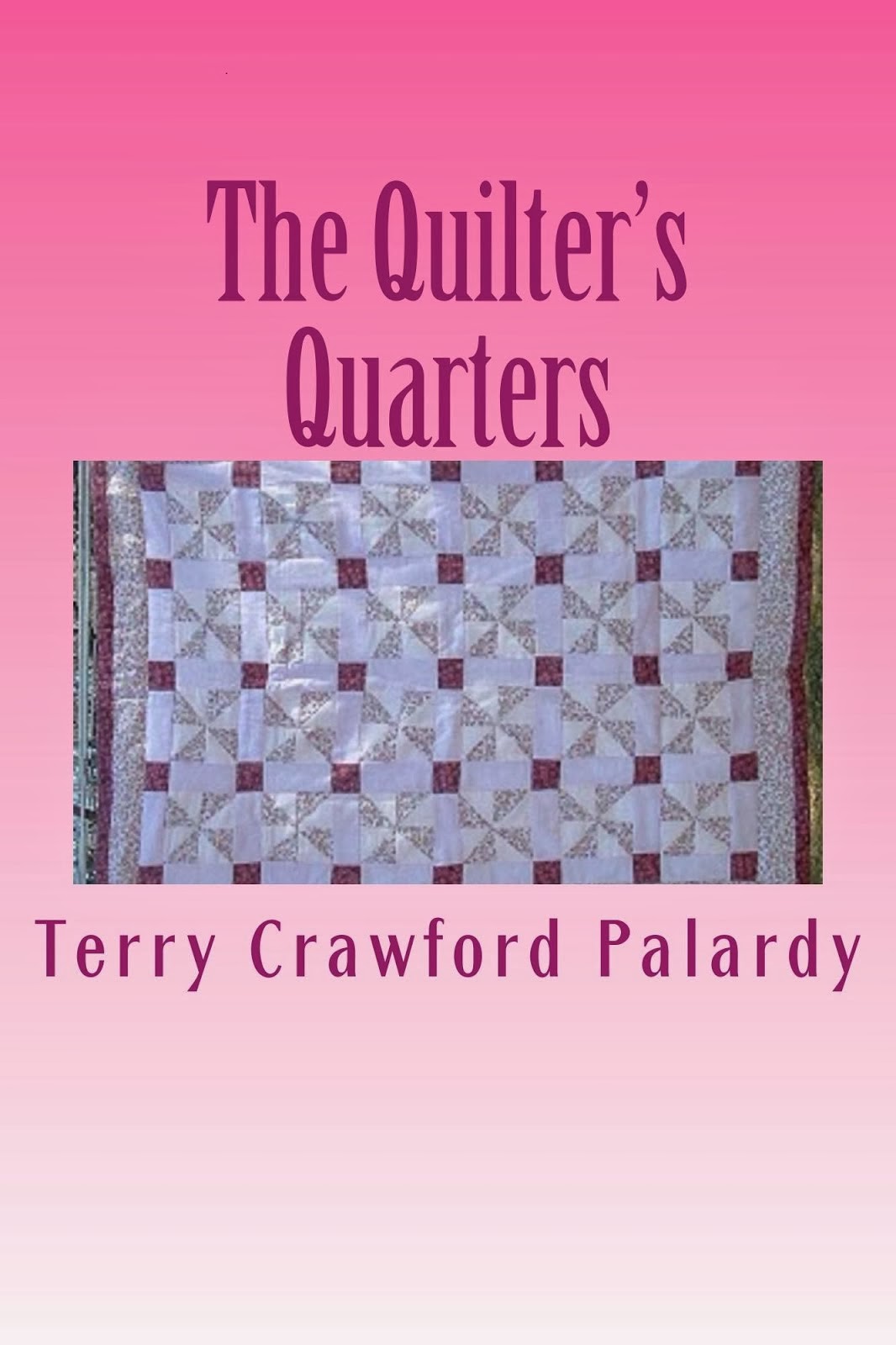 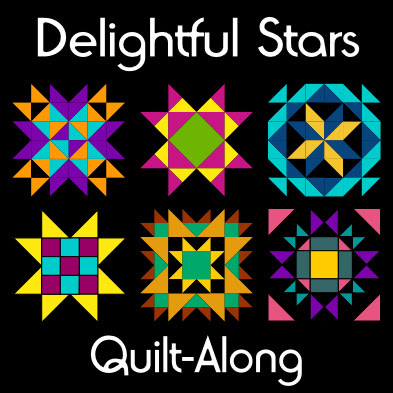